“I feel lucky that I work and live in a community where there are still small scale farmers creating fantastic products and local employment. The We Feed the World project aims to connect as many people as possible to the source of their food supply and gets them to question just who is dictating the future of their food economy and why? I urge everyone who thinks that’s an important question to get behind this” Hugh Fearnley-Whittingstall

This month Beyond GM launch a new crowdfunding campaign to generate support for a fantastic project showing the true face of farming around the world. Find out all about it below and make your pledge of support here.

What’s the Project about?

We Feed the World is a call to arms for anyone who wants a better food system.  We want to reach out to a large, mainstream public and show them that an alternative food system is not just possible but already working in feeding 70 percent of the world’s population.

The project has brought together over 30 award-winning photographers to take a series of portraits of farmers, around the world, who are using traditional, sustainable and highly successful methods of agriculture to feed their families, their communities and us.

These powerful images and their accompanying stories will form a large-scale exhibition, which will open in London and then tour six regional cities in the UK including Bristol, Glasgow and Liverpool.

Accompanying the exhibition, there will be a high-quality photographic book. Both will lead us on a journey through the myriad of ways in which sustainable agriculture works and help us to understand the positive impact it has on our health, environment, culture and society.

The public nature of the exhibition, plus the accompanying media, will attract significant attention to this vital story and ensure many more enter the critical debate surrounding the future of our food supply.

We want to show – through image and story - how we are all connected to the food system through the choices we make every day about where we shop and what we eat.

Your money will enable this to happen. Then it will go onto help finance small, farming projects around the world through the sales of the exhibition prints and the accompanying book. In return, you’ll not only get the satisfaction of being part of a movement but you can select from a number of “rewards” being offered on our site including organic goodie boxes and meals out at some of the UK’s top ethical restaurants. 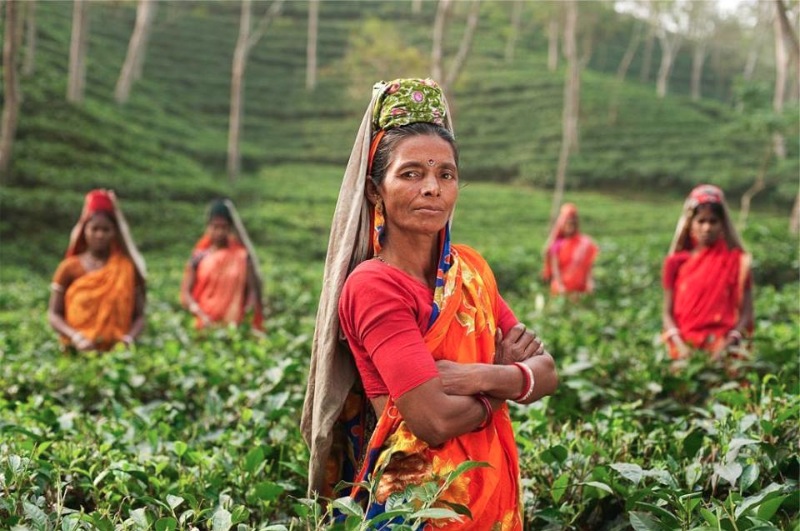 The project is being led by Beyond GM, a campaign group with an impressive history of public engagement and high profile campaigns. Last year, it launched The Letter from America, an open letter from American citizens to British citizens detailing the impact of 20 years of growing and eating GMOs.  The Letter has been signed by individuals and groups representing 60 million Americans including high profile individuals such as Susan Sarandon, Daryl Hannah and Robert Kennedy Junior.  It generated hundreds of letters to MPs in the UK and has now been translated into 8 languages.

This is what Daryl Hannah had to say about the campaign;   “Now is the time we must focus on and invest in the resilient agricultural practices that will allow us to thrive – for the sake of human health, the survival of other species and the wellbeing of the planetary ecosystem as a whole!”  Daryl Hannah
With this project, Beyond GM is working with the ex-picture editor of the Daily Telegraph Magazine, Cheryl Newman, to bring together a body of world-renowned photographers who will donate their time to take portraits of farmers around the world. These include fashion photographer, Rankin, award winning British photographers Marcus Bleasdale and Jane Hilton, Magnum photographers, Alec Soth, Jim Goldberg and Alessandra Sanguinetti and celebrated Brazilian photojournalist, Sebastaio Selgado plus many more.  Each of the photographers will take portraits of farmers in a country they are familiar with - either where they were born, live or work.

Who Else is involved?

Beyond GM are working alongside a number of organisations who work directly with the small, family farmers around the world, helping them to preserve their traditional ways of farming or transition to more sustainable, agroecological methods of food production.  These include the Gaia Foundation, The African Biodiversity Network, La Via Campesina, Groundswell International, EkoRural and Slow Food Youth.

“The We Feed the World Project is a vital contribution to the food justice movement and The Gaia Foundation are delighted to be a part of it. As the corporations pushing the industrial agriculture model spends billions on advertising and PR to spin an inaccurate impression amongst the general public, it’s critical that this is challenged by compelling and honest portrayals of the true face of food and farming around the world”
Rowan Phillimore, Deputy Director, The Gaia Foundation

We also work with a number of organisations who are helping us to spread the campaign message to a wider network. These include GMO Free USA, the Soil Association, River Cottage and Vivienne Westwood’s Climate Revolution.

“We Feed the World is an amazing opportunity for everyone in this country to engage with a healthier, more climate-friendly and more democratic food system. We have to speak out against the giant monopolies and government policies that are currently trying to dominate the food that we eat. Farmers must come before Profit! The Earth is not dispensable! Lets use the power of social media to share this campaign with as many people as we can and start a revolution in our food supply“. Vivienne Westwood, The Climate Revolution